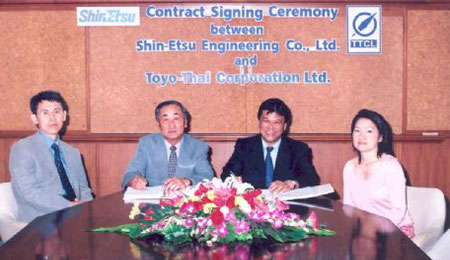 On June 21, 2005, Toyo-Thai Corporation Ltd. (TTCL) has been awarded a Contract for the World Scale Chlor-Akali Plant by Shin-Etsu Engineering Co., Ltd. This plant is the Toyo-Thai& rsquo s first plant order in United States of America.

Based on the latest technology of Asahi Kasei Chemical, Japan, Toyo-Thai& rsquo s scope of work includes engineering, procurement services and construction management of the plant on Lump Sum contract basis. The plant is scheduled for completion in the 1st quarter of 2007.

Toyo-Thai has built the number of Chlor-Alkali plants in the world using Asahi Glass process. Thanks to these rich experiences, Toyo-Thai will continue to strengthen its position in the international market.