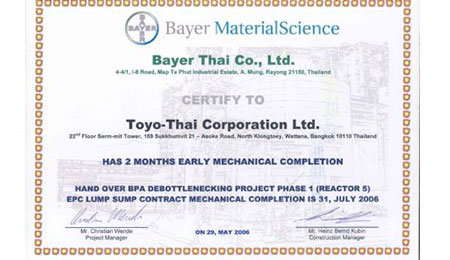 Scope of work of TTCL is Engineering, Procurement and Construction for this BPA Debottlenecking project which to expand Bisphenol – A 15% capacity of Bayer’ s existing facility in Map Ta Phut, Rayong Province, Thailand. The success of this project came from good collaboration between Bayer’ s project team and Toyo-Thai’ s project staffs.

Bisphenol-A is one of raw materials of polycarbonate used for the manufacture of a broad range of applications from optical storage media like CDs or CD-ROMs and automotive components to transparent sheets for roofing applications and advertising signage as well as drinking water containers.