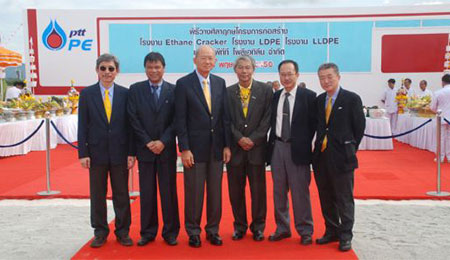 Toyo-Thai Corporation Ltd. have received Construction Contract on a lump sum basis for the a gas base ethylene plant with capacity 1,000,000 tons per year. This world-biggest-scale ethylene plant based on ABB Lummus Global technology will be the largest ethylene plant in Thailand and schedule to be completed by the end of October 2009. The ethylene produced by this plant will be the feedstock of polyethylene plants (LDPE & LLDPE) of PTTPE to be constructed concurrently in the same complex.

PTTPE also awards the Supply Contract and the Construction Contract to Toyo-Thai Corporation Ltd. for a 400,000 t/y linear low density polyethylene (LLDPE) plant. Based on Univation technologies, this large polyethylene plant is scheduled to be completed by the end of October 2009. The polyethylene produced by this plant will be used in various kinds of product such as packaging, containers, garbage bags, plastic films and etc.

This Ethane Cracker and Polyethylene Plants Complex is a part of master plan for the third wave of Thailand petrochemical industry development which is enhancing value of Thai natural gas reserves.