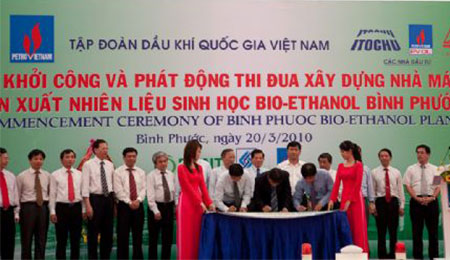 Toyo-Thai has reached an agreement to start constructing two ethanol plants in Vietnam this year worth a combined Bt4 billion in its pursuit of more foreign business to offset rising risks at home.

We won the bids thanks to 13 years of experience in the design and construction of large-scale plants abroad, including in Vietnam. In that country, we are represented by Toyo-Vietnam, director and general manager for sales Suvit Manomaiyanon said yesterday.

One plant belongs to Petrovietnam and the other to a Japanese investment group. Both plants have a capacity of 300,000 litres of ethanol per day.

It is our policy to expand foreign operations further, because they offer higher margins. We are outstanding abroad, with experience and cheaper costs, because our engineers are all Thais who command lower fees, Suvit said.

This will turn us from a Thai integrated contractor to an international player and help diversify risks generated by the Map Ta Phut crisis.

The company is not affected by the court freeze on projects in that industrial area, because all of its work there is nearly complete, he said.

The two Vietnamese projects will increase the company backlog to more than Bt10 billion, which can be realised this year.

After completion in 2012, the plants will produce ethanol to serve the growing demand for gasohol in Vietnam.

Toyo-Thai is a joint venture between Italian-Thai Development and Japan, Toyo Engineering. Last year, its Bt327-million net profit was the highest in the construction sector, while its profit margin rose to 21.3 per cent.

Toyo-Thai is also in the process of tendering for more projects worth a combined Bt39 billion, including fertiliser plants in Vietnam and Morocco.

Suvit is confident the company can land those jobs.