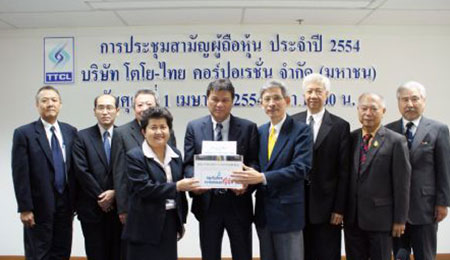 On April 1, 2011, executives and employees of Toyo-Thai Corporation Public Company Limited (TTCL), lead by Mr. Hironobu Iriya, President & CEO (middle), donate money amount 1,600,000 Baht for earthquake & tsunami victims in Japan through Japanese Chamber of Commerce, Bangkok. This is the second donation in addition to the first donation of 180,000 packs of dry food, which were sent by air freight on March 14, 2011. Chiyoda Corporation of Japan collaborated to distribute such dry food to earthquake & tsunami victims in Japan.