TTCL Public Company Limited (TTCL), the first integrated Engineering, Procurement and Construction (Integrated EPC) company in Thailand, was incorporated on 24 April, 1985 with a startup capital of THB 20 million. TTCL was formed by the joint venture of 2 leading international engineering and construction companies from Japan and Thailand, Toyo Engineering Corporation (TEC) and Italian-Thai Development Public Company Limited (ITD), with the shareholder stake of 49% and 51% respectively. TTCL has experiences and expertises in providing integrated design and engineering, procurement of machinery & equipment, and construction (Integrated EPC) of turnkey projects for industrial and process plants, mainly in energy, petrochemical, chemical and power industries. 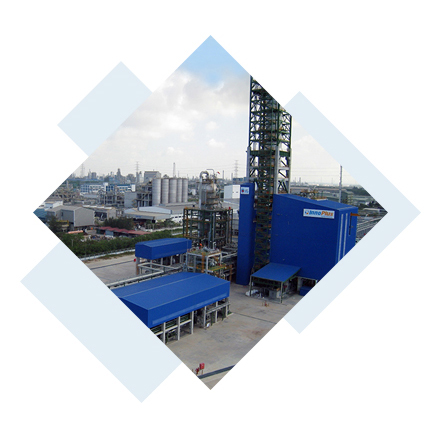 The Company has observed an increasing and continual growth in demand of Integrated EPC services from both domestic and overseas customers, especially for energy, petrochemical and power industries. The Company’s competitive advantage in terms of cost and specialized engineering teams for operating mega projects and complex technologies enable TTCL to expand its international businesses to overseas markets, particularly Asia Economics Community Countries (AEC), United Arab Emirates and Qatar. In June 2009, TTCL issued an initial public offering and became a listed Company in the Stock Exchange of Thailand, thereby enhancing the Company’s financial strength and credibility to international investors.

As a leading provider of Integrated EPC for more than 30 years, the Company has succeeded in the design and construction of more than 200 projects, demonstrating the Company’s reputation and trust among customers in terms of quality design and construction, scheduled delivery of work, and safety in operations. Besides, the Company increased its paid-up capital to THB 560 million with the objective to support the working capital requirements and investment in power plants.

In 27 April 2018, the Annual General Meeting of Shareholders of the Company resolved to approve the increase of the Company’s registered capital of THB 336 million from the existing registered capital of THB 560 million to THB 896 million by issuing 336 newly issued ordinary shares with a par value 1 Baht to support the exercise of TTCL-W1 of 112 million shares, the issuance and allocation to the existing shareholders (Right Offering) of 168 million shares and the allocation to the specific persons (Private Placement) of 56 million shares.

In August 2018, the Company has issued and offered of 56 million newly issued ordinary shares to specific persons (Private Placement) to Sojitz Corporation (“Sojitz”), in which Sojitz has become a major shareholder instead of TEC as they sold the Company’s shares since the beginning of the year 2018. The objective of increase capital is for enhancing the business collaboration in the future. Thus, at present, the Company’s paid-up capital was changed to THB 616 million.